Nika Križnar close to the podium in Ljubno

The organisers in Ljubno won the battle with the tough weather conditions and managed to pull off the third competition in three days. Among the Slovenian ski jumpers, Nika Križnar tackled the demanding conditions best and finished in excellent fourth place. She missed the podium by only 0.9 points. 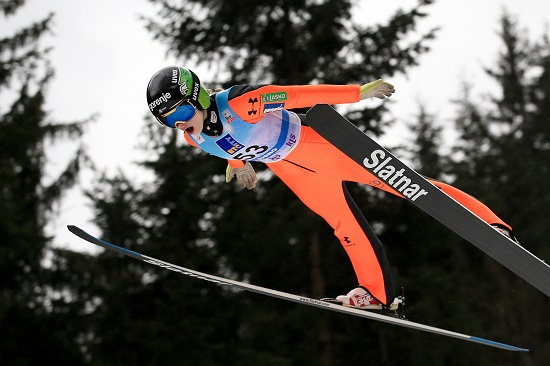 Due to strong winds, the organisers were first forced to cancel the qualifying round and also push back the start of the first round of the competition by half an hour. During the competition, the wind continued to change directions, which meant that the competition ran way longer than scheduled. It took almost an hour and a half for 59 competitors to jump, but the organisers managed to bring the first round to its end. The ski jumpers needed a fair share of luck to achieve a great result. Among the Slovenian ski jumpers, Nika Križnar battled through the tough conditions best. She jumped 81.5 metres and scored 91.4 points, placing 5th. The bad weather conditions left her without a great feeling after the jump: "I have very mixed feelings about my jump today. I'm not sure whether my jump was good or not since the conditions were really tough. I need to wait for my coach's instructions for the second jump. The conditions are tough, the competition is long and it is hard to remain focused." Urša Bogataj, who was third on Friday, also jumped great and finished the first round in 10th place. Among the top thirty after the first round were also Jerneja Brecl (18th) and Katra Komar (22nd ), both qualifying for the final round. Maja Vtič put in a very good jump (85.5 metres) but lost a lot of points due to a large wind deduction. She had some troubles with the landing and was ranked 32nd. The demanding conditions were too much for Špela Rogelj, who finished the competition after the 1st round (37th place).

The changing wind conditions and waiting atop the ski jump didn't bother the Japanese ski jumper Sara Takanashi, who put in a great jump in the first round – 89.5 metres, which amounted to 99.0 points and put her in the lead after the first round of the competition. Norway's Maren Lundby jumped into second place with 82.5 metres in considerably worse conditions (93.6 points). Placed third was Russia's Alexandra Kustova, who took advantage of great conditions and jumped 95 metres, which amounted to 91.9 points because of the wind deduction.

After a very long first round and a slight improvement of weather conditions, the organisers decided to try and also go through with the second round. The Slovene ski jumpers took excellent advantage of this opportunity, producing outstanding jumps in the final round. Katra Komar scored her best World Cup result (21st place) and improved by one place in the final round with 84.5 metres. Jerneja Brecl, who also jumped 84.5 metres, improved even more (by three spots and finished in 14th place. Urša Bogataj put in an excellent jump (86.5 metres) in tough conditions. She improved by one place and finished the weekend in Ljubno in 9th place. "I jumped really well in the second round. I'm happy that I managed to put in at least one great jump in the competition," commented Urša after a tough competition.

Nika Križnar attacked the second jump best – she jumped 83.5 metres, but the jury decided to lower the starting gate prior to her jump. After the jump, she took the lead and had to wait and see whether a podium placement was possible. Unfortunately, luck was not on her side, at least not on this occasion – she lost only by a small margin to Germany's Juliane Seyfarth, who placed third. "The 4th place is a nice result, even though I didn't put in my best jumps today and had some bad luck with the conditions in the first round. Still, my jumps in Ljubno have shown where I am among the world's elite. This 4th place will be a great memory for me," said satisfied Nika Križnar. In the second round, Russia's Kustova didn't jump well and finished 8th. The string of six consecutive wins by Lundby was broken by Sara Takanashi, who managed to hold on to her advantage from the first round.