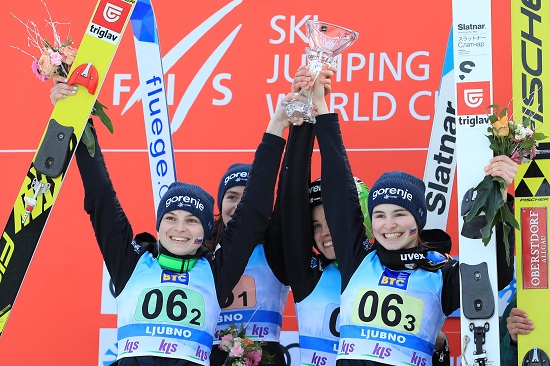 Jerneja Brecl, Špela Rogelj, Nika Križnar, and Urša Bogataj produced magnificent jumps in front of nearly 6,000 spectators in Ljubno. Maintaining a constant form and flying on the wings of cheering fans, our team was out-jumped only by the Germans who showed their supremacy already in the first round and won the competition.

Jerneja Brecl jumped first for our team and landed at 81.5 m in the first round, winning 114.5 points and placing 4th in her group. Rogelj did an even better job, finishing second in the second group of jumpers. She landed at 82.5 m and gathered 115.3 points, which placed Slovenia second. Top performances of our girls were supplemented by Nika Križnar who flew the farthest in the first round, landing at an amazing 91.5 m. Križnar received 128.7 points, bringing Slovenia even closer to the leading Germans. Urša Bogataj, the hero of yesterday's event, jumped last. The jumpers in the final group started from a gate that was lowered by two positions. Bogataj landed at 84.5 m and received 126.4 points which was enough for Slovenia to keep the second place after the first round with the Germans placing first.

Attacking from a great starting point after the first round, Brecl took the pressure well and again landed at 81.5 m; the worth of her jump is that much greater due to the tailwind. "Today, the jumping conditions were tough, but I managed to put together two great jumps. Now, all I have to do is wait for the other girls to perform," she said in an interview for TV SLO right after her second jump. Slovenia kept the second place. Špela Rogelj also continued with a great performance. Even though her jump was a meter shorter than in the first round, our team gained an even bigger advantage ahead of the teams in pursuit, with only the Germans fortifying their lead position. Rogelj's jump was 81.5 m long and the second place of Slovenia was almost secure after the fall of the Austrian and the Norwegian athlete. "All my jumps are well executed, I am very happy. Unfortunately, I had some bad luck with the weather conditions, but I can hardly wait for Nika and Urša to jump, since we are looking great at the moment," said Rogelj after a half of the final round. An even better jump than the first one made Križnar in the second round, exhibiting her great day form. She jumped 93.5 m with a beautiful landing. She was by far the best in her group; however, the German team's charge was too great, so our jumpers finished second. "I am speechless, I have made two incredible jumps and cannot wait for the competition tomorrow. I am very pleased and eager to attack in tomorrow's event, possibly with two jumps like the ones today," Križnar expressed her feelings about the event tomorrow after today's exceptional jumping. At the top, there was only Bogataj left who had no problem defending the second place. The last jump was 89.5 m long and the joy of our competitors at the out-run could begin. "Amazing atmosphere here in Ljubno today, the energy of the fans and all the girls really took over. We all gave our best and are very happy, the German team was too strong today," proudly commented Bogataj.

The Germans had a 25.4-point advantage over our competitors, but the fight for the third place was much more intense. The Austrian team beat Japan by only 2.6 points, pushing them to the fourth place.

Happily commenting on the performances of his protégées was also their coach, Zoran Zupančič: "Today, we have made 8 amazing jumps. I have been smiling practically from the start, because I saw the positive spirit of our jumpers. I would like to take this opportunity to thank everyone who has made this competition possible. Nika's jumps were especially outstanding today, she handled her setback, she was not too aggressive in the air and so she was able to make a nice landing. If today's competition were for individuals, Nika would be the winner, so we are looking forward to tomorrow!"